What Is the Cost of Probate? If you or a loved one dies in Indiana or Kentucky without a will, then your estate will go through probate.  You may ask yourself, “what is the cost of probate?”  The answer to that depends on the particulars of your assets and liabilities and your unique situation.  However, probate usually costs more and takes longer than the disposition of someone’s possessions when they have an estate plan. You may think that only rich people need estate plans, but that’s not true.  Creating an estate plan is an orderly, planned, proactive way of deciding how your assets will be distributed after you pass away.  Sometimes when a person fails to create a will or estate plan and things go through[…..]

Mediation Can Help Bring Legal Actions to an Early Conclusion The legal system has become so complex, time consuming and costly that parties normally work very hard to avoid using it. After a civil lawsuit is filed, negotiations may ebb and flow, but the vast majority of Indiana lawsuits are resolved through settlements, not verdicts after trials. Those are the endings you see in movies and TV — reality is normally far less dramatic. Mediation is the use of a neutral third party to help the parties negotiate a resolution. At Church, Langdon, Lopp, Banet Law, Larry Church, Jason Lopp and Dana Eberle-Peay not only negotiate settlements for their clients involved in litigation, but they also work as mediators in other cases. There are many benefits to settling a case.[…..]

Variations on Power of Attorney: One Size Does Not Fit All While you never know when you might have to rely on someone else, there are ways you can prepare for the possibility. The financial power of attorney (POA) is the cornerstone to any estate plan.  It allows a person (the principal) to give legal authority to someone else (the attorney-in-fact) to take financial actions on the principal’s behalf. There are many situations where having such a document and creating such a relationship is preferable to allowing one’s personal finances to languish. Of course, the planning needs of an unmarried, childless 21-year-old are likely not the same as a 65-year-old married couple with grandchildren, but powers of attorney are highly customizable. Third parties cannot simply make financial decisions for someone else[…..] The meaning of the Second Amendment to the United States Constitution is an often litigated topic with a reputation for provoking heated discussions. In a 2008 decision, the Supreme Court interpreted it as granting the right of gun ownership to individuals for purposes that include self-defense. The parameters for legally obtaining those guns vary from state to state, with both Kentucky and Indiana laws being more lenient than those of many other states. In fact, an examination by the Brady Campaign to End Gun Violence graded the gun laws of all 50 states based on 30 policies related to guns and ammunition, including procedures for lost or stolen firearms, background checks, and preventing dangerous people from buying weapons. Neither state fared[…..] These days, we do everything online. You can learn a language, find a love match, order groceries, even predict your own death if you’re into that sort of thing – the list is endless. The accessibility and utility of the Internet makes it easy to feel empowered, but some people who have turned to the Web for answers about trusts and estates have not had a positive experience. In fact, some who chose to “cheaply” draft trust or estate documents themselves ended up with unintended consequences that cost their estates more money than if they had sought professional legal advice in the beginning. There’s no doubt that contemplating our own mortality is a depressing prospect. No one relishes the thought[…..] 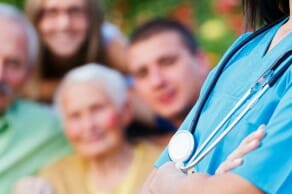 The federal government is a massive entity, the true size of which is up for debate. Depending on the source, the number of federal agencies has been reported to be as few as 60 and as many as 430. One agency whose existence is not in question is the Centers for Medicare and Medicaid Services (CMS), which, among other responsibilities, oversees Medicare and works with state governments to manage Medicaid. These two similar-sounding public insurance programs are very different, but they have the same goal of providing medical and health-related services to certain groups of disadvantaged people. Medicaid delivers healthcare coverage to low-income families and individuals, including seniors, parents, children, pregnant women, and people with disabilities. It is jointly funded[…..]

What Happens if You Die in Indiana Without a Will? Everyone dies, but not everyone makes a will. While it’s understandable that some people are uncomfortable discussing their mortality, their reluctance to plan for it can force their families to fight through the courts in order to determine where their assets will go and how their debts will be paid. Unfortunately, not having a will is extremely common. According to a 2014 survey, more than 60 percent of Americans do not have one. And the No. 1 reason why not? “Just haven’t gotten around to making one.” Who should have a will? Just about everyone. Whether your estate is small and simple or large and complicated, planning ahead gives you some control over what happens to your belongings while also[…..]

Some Estate Planning Considerations for Same-Sex Couples After Obergefell

The law is always in flux. To be effective, laws have to be able to address the constantly evolving views and values of society. Many civil rights issues are battled over in the courts and the legislature for decades. In 1973, Maryland became the first state to ban same-sex marriage by statute, spurring the gay and lesbian equal rights movement forward through domestic partnerships, the Defense of Marriage Act (DOMA), constitutional amendments, civil unions, patchwork state legalization/prohibition, and full marriage legalization in June of 2015. The Supreme Court decision in Obergefell vs. Hodges prevents any state from denying marriage licenses to same-sex couples. That ruling automatically results in many benefits and protections under the law. Same-sex couples can now file state and[…..]